A few days ago, CloudOn released their free mobile app that brought Microsoft Office directly to your Apple iPad. The cloud-based service effectively runs Office on their end, allowing you to use apps like Word and PowerPoint to edit your documents, which you would house in Dropbox. But after overwhelming demand, they removed the free app yesterday from the iTunes App Store.

CloudOn stated in a blog post, "Although we had planned to support a large number of users, the interest generated was beyond our expectations, and we have had a few teething issues with our platform (some of which we have already partially resolved). We have also made additional resources available to ensure that we can continue to support our current users."

But now it seems CloudOn is back up in the iTunes App Store for free. If you want it, hurry up and snag it, just in case they remove it again. It's the next best thing to the rumored Microsoft Office for Mac version, which might actually be in the works. In order to use CloudOn, you will need a Dropbox account.

CloudOn lets you use your iPad to create, view, and edit files directly in Microsoft Word, Excel and PowerPoint. These applications will work the way you expect them to, and your files will look the way you want them to. Here's a rundown of the features:

Download the free app now in the iTunes App Store.

They do plan to charge for certain services eventually, while hoping to keep some basic features free. If you're not down for the cloud-based editing, there are other plenty of other ways you can edit Microsoft Office docs on your iPad.

Apple's iWork programs Keynote, Numbers, and Pages all let you open and save documents as Office versions. Each app costs $9.99 in the iTunes App Store, which means almost 30 bucks for all three. All of the most recent updates to the apps has caused frustration with those working with Office docs, so until they've been addressed, it might be a good idea to skip until a new update is released. Plus, it's a whole different workflow compared to what CloudOn was offering. But still, it's a good idea if you like Apple's office suite, and aren't primarily using this for Office docs.

In order to work with Microsoft Office documents, you would have to drag-and-drop them on your Mac to your iCloud in order for them to appear on your iPad. You can then save it to iCloud or send it in an email via Mail.

One of the closet apps to having Office itself on your iPad (next to CloudOn) is Quickoffice Pro HD, which goes for $19.99. It's got a nice interface, and let's you create, edit, and share Office docs. You can also access, transfer, and manage files on your iPad and through Evernote, Dropbox, Google Docs, Box, Huddle, SugarSync, Egnyte, and Catch. 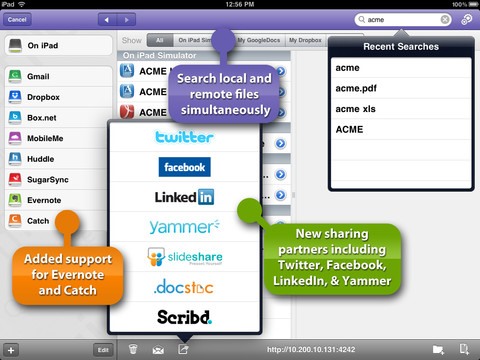 Another options is Documents to Go by DataViz. It goes for $9.99 (there's also a business-minded Premium version for $16.99) in the App Store. It's an all-in-one app that supports Excel, Word, PowerPoint, and PDFs, as well as iWork files. You can email files via Mail, sync via the included desktop application, or sync via iTunes with a USB cable. 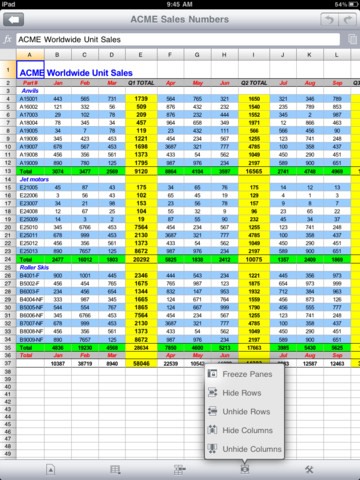 The premium has support for saving with Google Docs, Box.net, Dropbox, iDisk and SugarSync.

Office2 HD ($7.99) also lets you open, view, create and edit Excel, Word, and PowerPoint documents. And it lets you open, edit, save, delete and rename files stored in Dropbox, Box.net, myDisk.se, and any WebDAV server. You can also transfer files with iTunes via a USB cable. 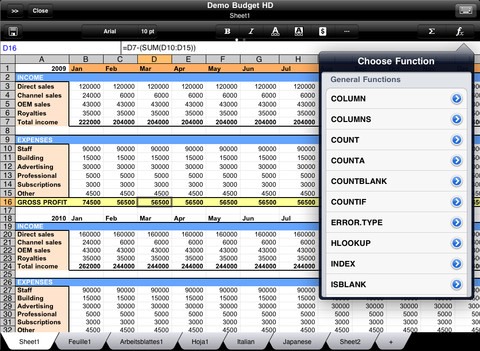 The free CloudOn app is definitely the best for those already comfortable with the regular Office interface, and it will only improve once they fix some minor issues and prep for more users.

But if you're not secure with cloud-based productivity, then the iWork apps are definitely the most iPad-friendly, and once the recent bugs get sorted out, it's your best option for now. Quickoffice comes in second because of its enhanced iPad workflow, but Office2 and Documents to Go are cheaper solutions.

There's also another cloud-based editor, Soonr, but you have to pay a monthly subscription, which is not worth it. I'll be sticking with CloudOn for now, unless they plan on implementing a monthly fee, which I'm adamantly against.